Yesterday, I wrote about some of the weirdos who have spoken at Sarah Palin’s church over the years.  I wondered then whether she actually heard any of those sermons, since the right thought it was a legitimate question vis-a-vis Obama/Jeremiah Wright.

Now we know.  Linking to Politico, John Aravosis at AMERICAblog has additional information and it ain’t pretty.  Palin was reportedly there as David Brickner, a Jew for Jesus,

described terrorist attacks on Israelis as God’s “judgment of unbelief” of Jews who haven’t embraced Christianity.

John notes that McCain was glad to pile on and tie Barack Obama to Jeremiah Wright.

And as a Jew and a supporter of Israel, I would add this:

Jews for Jesus believe that Jews-not-for-Jesus go to hell.  They use unforgivable attacks against civilians to patronizingly lecture the rest of us about getting “saved.”  I couldn’t care less what they believe, but these cultists see terrorist attacks against Jews as confirmation of their loony views.  So they exploit them.

And people who exploit the deaths of innocent people — Jews, Arabs, whoever — ought to be condemned, not honored in a place of worship, particularly by a candidate for the Vice Presidency of the United States.  So why didn’t Sarah Palin get all Mavericky, show some leadership and leave in protest? My guess: because she agrees.

Andrew Sullivan points out that Jews for Jesus doesn’t just try and “save” poor schmoes like me, as the ADL reports, it “targets” us

for Conversion with Subterfuge and Deception.

Yesterday, I noted that Sarah Palin was a Pat Buchanan supporter in 1999.  I suggested that the Obama campaign begin running ads in South Florida to point out to people who could be my grandparents that someone potentially very close to the presidency or actually in it once supported a Jew-hater for that office.

Is a complete unknown who supported a despicable Israel-basher for president worthy of the Jewish votes McCain seeks?  Since Palin has no known foreign policy views of her own, it’s a fair question to ask.

A clue to her views on the Middle East may be stuck in her windowsill.  Yesterday, a story alleging that Palin’s youngest son is actually her grandson was posted on Daily Kos.  The item included an interview with Palin in her Juneau office.  Clearly visible over her left shoulder is an Israeli flag.  Here are a couple of screenshots: 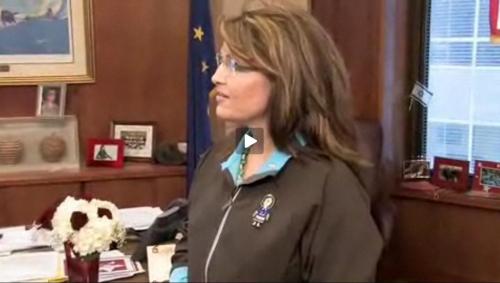 It looks like she may even be wearing an Israeli flag lapel pin — I can’t tell.

This year, we celebrated Israel’s 60th anniversary, so it’s entirely possible the flags and possible flag pin were there to mark the occasion.  So maybe she’s pro-Israel after all.  If so, good for her.  I’m glad to hear it.  But that’s not the point.

What’s important is that John McCain’s first presidential decision was to thrust upon the nation someone who may have to make critical decisions affecting every last one of us and we’re all reduced to squinting at blurry photos to try and decipher her views on the world.

Several readers have said that Palin supported Steve Forbes, not Pat Buchanan in 2000.  Allah Pundit points to this Politico story laying out the evidence:

After looking into it, McCain spokesman Michael Goldfarb says that Sarah Palin supported Steve Forbes, not Pat Buchanan, in 1996, contrary to what Buchanan said on “Hardball.”

Not particularly compelling, but something to keep in mind as information about this tabula rasa dribbles in.  If only we had some blurry photographic evidence to prove it…